The Last Jedi Isn’t The Worst Movie Ever

Much like the galaxy itself, the fans are more divided than ever. But put down the pitchforks, kids – The Last Jedi isn’t the worst movie ever.

Moderate spoilers for Star Wars:The Last Jedi to follow. None of the major reveals will be mentioned, but some of the sequences and themes will be discussed in depth.

If you’ve been on the Internet recently, you may have noticed it is currently burning down in a flame war between Star Wars fans. Major news outlets are getting in on it. It’s amazing what fires start when all the nerds come out to play with a new story in one of the most well established pieces of global culture ever. The backlash has been somewhat unprecedented, even causing the folks at Disney to have to mobilise their PR teams in force.

I have held and continue to hold one of the super unpopular opinions about Star Wars in that I preferred the Star Wars prequels over the original trilogy. Among the many reasons, I preferred the world building and sheer scale of the story from the perspective of the first three digited movies over the farmer smuggler princess perspective of the original trilogy. That said, I’m a huge fan of all of them. Well, most of them. It’s called Rogue One because One is the number of people I find personally interesting or memorable in that movie (Tarkin). And all the games and little side stories are a big hit with me.

And so, what did I think of the latest entry in the series? Calm down guys, The Last Jedi isn’t the worst movie ever. I actually rather enjoyed it. Multiple viewings and enjoying the new theories and discussions spawned from this movie. But there are definitely some things that I thought were a bit strange.

So here we go. My review of The Last Jedi. Once again, moderate spoiler warning.

The casino part isn’t that bad

Every single review I’ve seen of The Last Jedi make out that the Finn and Rose section of the movie is the worst thing in the whole universe. For me I watched it and thought, eh, it’s just part of the same movie. Makes sense, nothing seems to drag on too long, and it got things done as it needed to.

Or at least that’s how it was to me. I saw some reviews before I saw the movie that this was a sequence that would ruin the whole movie. For me it felt like it fit right with the rest of what was being told. 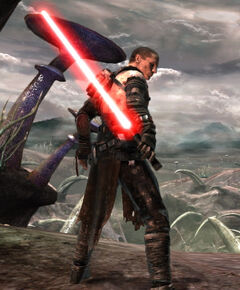 As a Star Wars game fan, I recognized a number of things from the larger lore of Star Wars. I recognized a dark side place on one of the planets was accessed via the entry way of a Sith worm paralleling the history of the Sith Lords around Yavin 4 and Korriban. I loved seeing Rey pull out the lightsabre stance used by Starkiller from The Force Unleashed. One of the characters disconnecting themselves from the Force completely harkens back to the behaviour of the Jedi Exile in Knights of the Old Republic 2.

And I still think that Kylo and Rey was a new spin on a classic Star Wars story. If you read my Force Awakens review, you may have noticed I commented that their relationship and skills reminded me of an existing duo. After this movie, I’m convinced they’re reusing their story (see the main article picture above for which duo I can’t stop seeing). Just waiting for Darth Malak to increase production aboard the Star Forge.

That said, Kylo and Rey was fantastic. Really well done.

The difficulty of meeting your heroes

The characters in this movie parallel many of the fans in their biggest complaint of the movie – that Luke was not who they thought he would be.

And they directly address this in the movie. Even Luke himself speaks about the fallacy of meeting legends and your heroes.

30 years have passed for this man. He feels like has failed in the area of his life calling. He notes the failure in the Jedi Order in the prequel years (nice touch and cool to see such a large fan theory make it into a Star Wars movie). If you’ve ever met someone who has faced and been bathed in the reality of their failure, Luke makes a lot of sense. If you haven’t, then you’re still wishing he was Red 5 and cutting down Jabba The Hutt again.

Give up your theories

I think that The Force Awakens successfully got the fans back into the lore of Star Wars again like never before. Unfortunately this means people came into the movie absolutely dripping with potential relationships and set pieces and ideas of how things were going to be, only to have them not be that way at all. The way that Episode 9 has been set up means it is much more of a blank slate where literally anything could happen, and I think the last movie in this trilogy won’t have the same backlash in this regard.

A movie that I was very surprised to see in terms of how much humour was present this year was Thor: Ragnarok. Now that movie was hilarious.

I could definitely see some of that new Disney humour in movies trying to creep into this one. It just didn’t seem all that funny to me in the places people said it was supposed to be. The Jedi nuns were a good laugh though.

Stop with the puppets already

The Force Awakens had a number of puppets and animatronics used. Even though the prequels used more practical effects than the original trilogy, people still have a stigma that it was all CGI, and that this was a bad thing. Episode 7 tried to distance itself from the complaints against the prequels by hammering the practical sets and effects, but it didn’t always look that great.

The Last Jedi unfortunately continues this trend, and as much as the puppets are great in the original trilogy, we don’t live in this same world anymore, and a lot of the puppetry was simply not great. The CGI characters all looked immensely more believable than any puppet used here, and the film knows it. As soon as a puppet is present, the lighting changes dramatically, or the puppet is only in frame for a few seconds before being cut away from.

That, and they are no where near as expressive as their CG equivalents. People forget that the Star Wars prequels were the precursor to every modern Hollywood blockbuster in existence, introducing and perfecting many of the techniques used today. If you’ve ever watched the Lord of the Rings special features, you would know that their technology was taken directy from the sets of the prequels. Characters like Gollum and battle scenes in any of the Marvel movies would not be possible without it, and there is a reason why such puppetry isn’t so widely used any more.

Try watching The Force Awakens now and you’ll see just how much the puppets stand out. Especially in a few major scenes in this movie, the puppets were just too much for me, and actually took away from the believability of some of the more key moments in the movie. That said, I am aware some people got up and started clapping with some of these, so perhaps I am in the minority on this one.

I left the movie thinking, hey, that was really cool that there are so many new modern heroines for young girls to aspire to be. Women are represented very well in the newer films and it’s great that a strong female lead like Rey is taking the new trilogy forward.

It was just very interesting that that is the male female dynamic of every relationship in this movie. Some people have said that it is a continued theme in Disney movies that men are no longer smart in their films. As much as I would like to disagree with their sentiment as I do love seeing the strong female characters, this is some merit to their comments as it pertains to this movie. Would love to hear what you think about these comments also.

For me, the two best characters and performances in The Last Jedi are Andy Serkis’ Snoke, and Adam Driver’s Kylo Ren/Ben Solo, and the best scene was the confrontation between Rey, Kylo and Snoke in Snoke’s Throne Room.

Snoke is menacing and portrayed with such avarice that you can’t take your eyes off him. Serkis’ portrayal is masterful and emphatic. If you want to be intimidated, just give Mr Serkis a microphone and ask him to read any sentence as if it were spoken by Snoke. You would be sitting in the corner of your room for a while I’m sure. Well done Andy.

I think the real star of The Last Jedi is Kylo Ren. The Last Jedi really gives this guy some serious depth, weight, and surprisingly, relatability. You understand him. He’s not untouchable. This is something that people are complaining about him – that he is too human – but I think that’s what makes him so great.

I really enjoyed The Last Jedi. And people, The Last Jedi isn’t the worst movie ever. It didn’t ruin your childhood. It’s just a movie. Enjoy it, explore it, don’t take it too seriously.

For me personally, it’s not my favourite Star Wars film. To be honest, even though I enjoyed it, it’s probably somewhere down the bottom of the list in terms of how I’d rank it. Still an enjoyable movie and a worthwhile contribution to the machine that is Star Wars.

What were your thoughts on The Last Jedi? Love it or hate it? Current statistics say that there’s a 50-50 split, so you’ll have as many people disagree with you as you do agree with you. Still interesting to hear your thoughts nonetheless!

Theme by Anders Noren — Up ↑